Teri Todd ← Back to Staff Directory 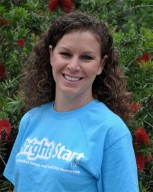 My adventure began during the summer of 1990. I worked as a camp counselor at the YWCA and had two children in my care that had a seizure disorder and another who was a suspected victim of child abuse. From that summer forward I have worked in various types of settings revolving around children in need. I worked as an intern at a transitional school for homeless children, a Child Protective Services worker at DSS, a Project Coordinator for the Pediatric Department at Hitchcock Rehabilitation Center, and an Early Intervention Program Coordinator for Department of Disabilities and Special Needs (DDSN). During my time at DDSN, I realized I wanted to be the one to serve families of children with special needs. I didn’t want to go to meetings anymore or do file reviews, I wanted to be in the homes and on the floors of these wonderful children and their families. So, it began… On March 1, 1999, Beth Bunge and I started Bright Start and became the first private providers of Early Intervention services in the state. With our combined knowledge of child development and community services, we felt as though we could provide families with something they deserved: A CHOICE as to who would provide services to their most precious family members. Our original plan was to hire a few Early Interventionists in the Columbia area and then expand statewide. We quickly realized once we were up and running that our plan was going to change. We originally carried full caseloads of 18 – 20 families but realized that in order to run the business side of things, our caseloads had to scale down. Today I attend state level meetings, am a member of the SC Coalition, and the SC Human Service Provider group in order to collaborate with other agencies to advocate for all individuals with special needs. I am actively involved with my local church and sit on the Advisory Board at the Jeep Rogers YMCA.