Becky Miller ← Back to Staff Directory 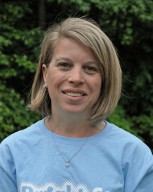 In college at USC, I entered the Exercise Science program and was involved in the Perceptual Motor Development Lab where I was able to work with many children who were developmentally delayed. This experience was both rewarding and sparked an interest to continue working with children and individuals with special needs. Just after college, I worked for Babcock Center in a program called Phoenix Center with individuals with head injuries. After a couple of years, I decided I really wanted to work with young children and became an Early Interventionist. I began working at Bright Start as an Early Interventionist in 1999 and later became a Service Coordinator in 2003. Working with all of the children and families who receive services through Bright Start has been extremely fulfilling and rewarding as we are able to be a part of the lives of these wonderful individuals we serve.